His main theme is Time to Die, and his battle theme is Duchess Battle, both from the soundtrack of American McGee's Alice. Aristotle's theme is Insane Kids from Alice Madness Returns.

Dr. Death was once a regular BLU Medic by the name of Tobias Moreau. He worked well with the rest of his team, and had even entered a romantic relationship with Agatha, a female Sniper on the team. He was unusually attached to his Medigun, refusing to let anyone else touch or handle it; this behavior caused his teammates to become suspicious. Eventually, the team's Heavy managed to get Tobias' Medigun away from him long enough to discover why: it was fake. He was soon discharged for that reason. Much to everyone's surprise, Agatha followed, and proposed to Tobias.

The two got married, and decided they wanted children as they tried to rebuild their lives outside of BLU. Unfortunately, Agatha died giving birth, causing Tobias to finally break down. Distraught, he tried to revive her with the same magic he once used to heal his teammates. When he finally decided he couldn't bring her back from the grave, he hung himself to be with Agatha.

Mere weeks after his death, a pair of undead hunters were drawn to the cemetery. There were numerous claims that there were strange grunting noises to be heard at night. After some searching about the graves, they found and disinterred the remains of Tobias, who had accidentally turned himself into a nachzehrer. They planned on killing him then and there, but they discovered too late that the undead Tobias was wide awake and fully aware of their intentions. After killing them both in an act of self-defense, he fled the grounds. Once free, Tobias began seeking out those that were close to him before his death and draining their life. Eventually, one of his former friends, a BLU Engineer, had enough time to defend himself, and stunned Tobias with a blow to the head. Thanks to the injury, he was self-aware again once he came to his senses, and fled in shame. Donning a Blighted Beak and Grimm Hatte to hide his facial features, he adopted the persona of Dr. Death.

Dr. Death appears as a BLK Medic wearing a Blighted Beak and Grimm Hatte. He doesn't wear a backpack. If he doesn't regularly restore his body, he will begin to rot; his skin will turn blue-green and wounds will open all over his body. His eyes are light gray.

Dr. Death seems to always have a calm, composed state of mind; however, it is more often than not a facade covering a constant fear of failure. Thus, every move he makes is carefully thought out to the letter. If you interfere with one of his plans, and your intervention causes the plan to take a turn for the worst, you can be certain he will pursue you until he has punished you for your actions. Despite his dedication to making his goals a reality, nobody knows what exactly his goals are, partly because he almost never speaks.

Dr. Death values having minions and allies. He attempts to keep them by rewarding those who are especially loyal and severely punishing traitors, often but not strictly by killing them. Not the kind to be hypocritical, Dr. Death will aid his allies whenever possible, and would never betray them unless necessary to save his own life or Aristotle's.

In his boar form, Dr. Death loses his usual demeanor in favor of a blind fury and generally animalistic behavior. 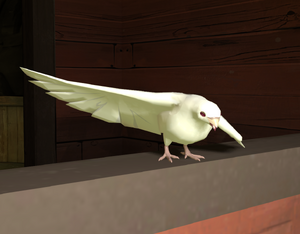 "This fine gentleman before you is my ever-powerful master, the one you most likely only know as Doctor Death."
―Aristotle, introducing Dr. Death.

Aristotle is a talking bird and Dr. Death's familiar. He appears to be a plain white dove (BLU Archimedes), and, when not flying about on his own, will often be seen perched on Dr. Death's head, shoulder, or hand. As the Medic rarely speaks, Aristotle speaks for the both of them. The bird shares his master's dignified behavior, and has a tendency to speak in an excessively verbose manner.

As a sorcerer, Dr. Death has several spells he can use to his advantage:

Retrieved from "https://tf2freakconcept.fandom.com/wiki/Dr._Death?oldid=9077"
Community content is available under CC-BY-SA unless otherwise noted.